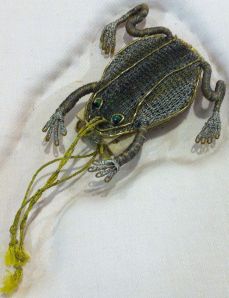 Still reeling from the excitement of the second workshop of our network! We were aiming to examine the relationships between different types of textile object, and to think about how to analyse them as a group, rather than as individual items or types of item. So we spent the morning looking at a variety of Ashmolean textiles – the frog-shaped purse, many embroidered panels, a tapestry bed valance and a wonderful embroidered casket. We heard that many of these objects were not professionally made, despite their incredible intricacy, but were the work of skilled elite women in the seventeenth century, stitching at home and contributing to their domestic environment through their work.

We moved round these things slowly – ‘long looking’ – taking time to let our eyes wander around each object, gradually taking in the different elements, the different stitches, the textures and the colours. We learned something here about how long you could spend looking at these objects, and the pleasures there are in discovery over a period of time. Some elements of the design were raised – petals and leaves, collars and cuffs that might have trembled in the breeze, and padded flowers and fish. As we started to get our eye in we began to notice that certain elements cropped up again and again, presumably the type of things that the makers of these objects saw as challenges to their skills. The one that particularly fascinated me was water – everywhere you looked there were fountains and pools in fantastical elite gardens, there were lakes in the Garden of Eden and there was even the well in the story of Jacob’s bride. And in each case, a different way of trying to render the ephemeral shapes and patterns of the surface of the water.

In the afternoon we discussed what digital recreations of these objects might offer to our understanding of them. And Graeme Earl asked questions about the nature of the realism that was being aimed at here. Were these women trying to reproduce water that looked like water, or to stitch something whose striking colours and textures drew the eye into, rather than beyond itself? The precocious materiality of their work seemed to me to be the point – a celebration of pushing the boundaries of two dimensions, of making things real in their physical presence for the viewer, of intruding into the space of the room. These complex, detailed, self-conscious pieces draw the eye and the mind – working out how they function in the spaces for which they were designed is our next challenge… 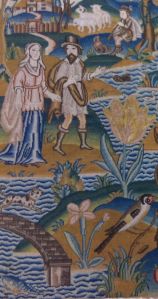 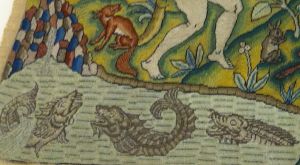 Ahead of the forthcoming workshop for the AHRC-funded Decorative Textiles Network, I’ve been reflecting on the visual dynamic between ‘material’ things and ‘histories’ as represented visually through narrative iconography. Our headline image for this blog is a tapestry of English manufacture with a scene representing the classical legend of the Judgement of Paris, probably produced c.1600-1620. I see it every day on a wall at the Shakespeare Institute in Stratford-upon-Avon. Originally the narrative scene would have been at the centre of a large tapestry hanging surrounded by flora and fauna, similar to this example in the Victoria & Albert Museum, but at some stage the hanging has been cut down to its current form as a long narrow strip. This object represents many of the questions we are investigating through the research network; we are concerned with how early modern people negotiated the relationship between pattern, pictorial imagery, inscriptions and texture of surfaces (including quality of materials, technique and skill) when experiencing decorative textiles. 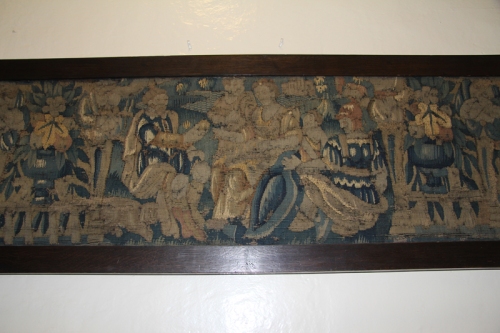 With my interest in iconography I’m particularly struck by the nature and position of the narrative scene in this sort of large-scale tapestry hanging. The minimising of the narrative or pictorial subject matter to a single scene contained within a central cartouche is in marked contrast to traditional, imported  tapestry where such subject matter was often life-sized, filling the main body of the hanging with a narrow decorative border around the edge. Here it is the flora and fauna that fills the main body of the hanging. There are no doubt practical and economic reasons for this difference; perhaps the result of insufficient craftsmen skilled in representing figurative subject matter in England, so that there were cost implications for larger-scale work. But this down-sizing of the narrative content certainly affects the overall visual impact of the object.

Interestingly, the scene at the centre of the V&A tapestry lacks a vital component of the iconography—only two of the three goddesses are present, and their usual attributes are missing so that identification of the image depends on the accompanying inscription around the framing cartouche: ‘EPESTELS OUT OF OVID IX CHAPTER’ and ‘WHEN PARESE GAVE THE GOLDENE APPEL’. 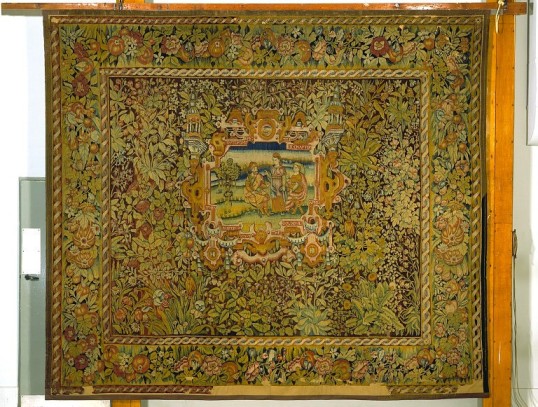 This calls into question the communicative capacity and role of the narrative image and suggests that the detail of the narrative imagery was less important than the statement of its subject matter (through text) and the overall appearance of the design with its emphasis on the rich intricacy of the surrounding floral imagery; no longer contained within the framing border this has migrated into the main body of the tapestry. And yet, the central position of the narrative scene makes it a natural focal point, suggesting priority, and means that it would be at convenient eye-level when hanging on the wall, whereas the lower section of the hanging might be obscured by furniture. This position therefore seems designed to attract and focus attention on the central narrative image. The same scene as it is depicted in the Institute’s tapestry does include all three goddesses and their attributes although it requires an eye familiar with this iconography to identify the composition and subject (there is no explanatory text in the remaining strip of fragment to aid identification, although such text may have been placed above or below the scene originally).

So, when we look at an object such as this, what aspect of its form, imagery and materials do we engage with first—how important is awareness of the subject matter, compared with appreciation of the overall design or the quality of materials and woven surface? Do we see and engage with crafted objects like these tapestries in much the same way as early modern people would have done? To what extent is the nature of experience in response to such objects informed by biological perception or cultural determinants; education, social status, gender? Is it possible to recover a sense of how historical ‘ways of seeing’ operated’? Watch this space…

The second workshop of the AHRC-funded research network, Ways of Seeing the English Domestic Interior 1500-1700: the case of decorative textiles will be held at the Ashmolean Museum, Oxford, on Wednesday 16 October 2012.